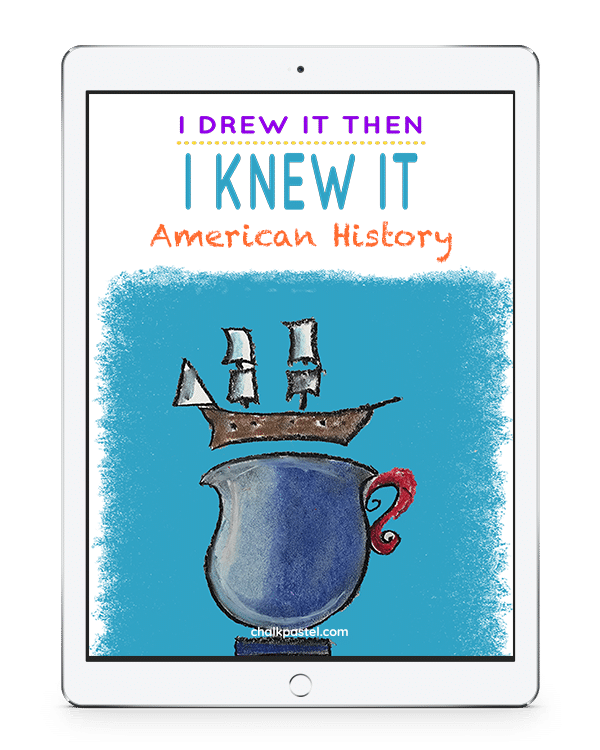 What is included in this bundled course?

Feel free to stop, rewind and enjoy each video art tutorial at your own pace. Enjoy each one over and over as you practice with chalk pastels and learn more about this era of history.

Calling artists of all ages! In 1492 Columbus sailed the ocean blue. Paint a wonderful tall ship and an epic voyage — in celebration of Columbus Day.

Learn about both the Continental and British uniforms as you paint them with chalk pastels. Suggested supplies: white construction paper. Red, blue, black, brown, yellow (or gold) chalk pastels.

Paint a representation of this famous event. A tea cup and a ship!

Enjoy an art lesson of the early American colonists.

Paint a representation of the thirteen colonies – with the gathering storm from England across the sea.

Paint this very famous part of the war – the burning of the White House.

Paint a most important document – the American Constitution in chalk pastels!

Yes, women were a part of war as well. Paint an action scene with chalk pastels!

Paint the objects that went with Paul Revere on this famous ride — his hat and a lantern.

Paint the beautiful discoveries of Lewis and Clark!

Paint this most important French military and political leader.

A colorful painting of this famous American Landmark. The Golden Gate Bridge has been declared “One of the Wonders of the Modern World” by the American Society of Civil Engineers, and is recognizable all over the world as an American symbol!

The Liberty Bell was cast with the lettering “Proclaim liberty throughout the land unto all the inhabitants thereof.”

The famous monument to the first President of the United States.

Yellowstone Falls consists of two major waterfalls; we will paint the Lower Falls.

Delicate Arch is located in Arches National Park in the southeastern part of Utah.

We are about to take an adventure to one of America’s most beautiful mountain range – the Grand Tetons.

Another great monument to an American President.

Lighthouses served for years as navigational aids for maritime pilots at sea or on inland waterways.

There were several cannons used in the civil war, all of which were very effective. These cannons include the 6 pounder Gun, 12 and 24 pound Howitzer, 10 and 20 pound Parrott rifle, 3 inch ordinance rifle and the infamous 12 pounder Napoleon cannon.