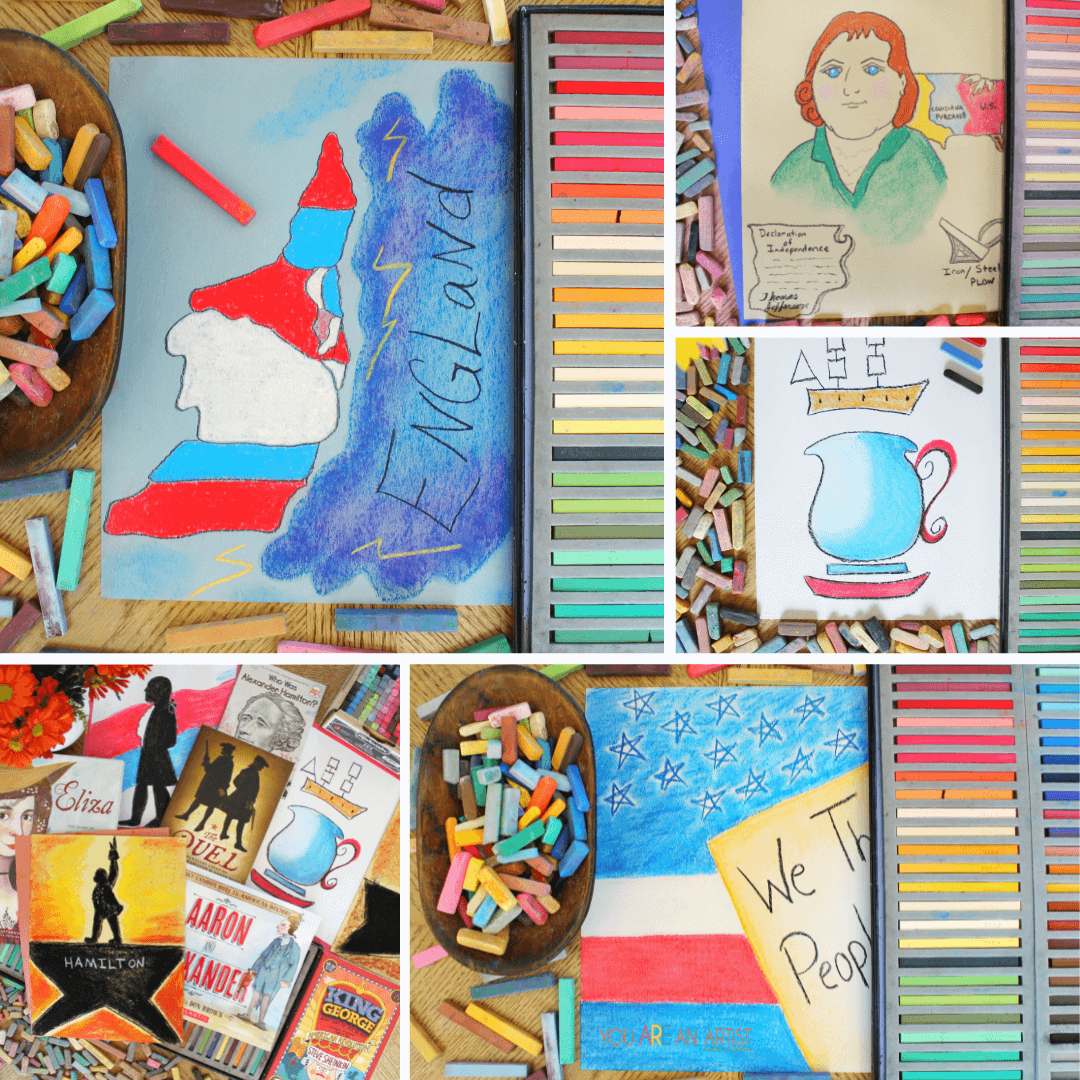 Are your students learning about the 13 Colonies? Why not add Nana’s wonderful chalk pastels as a colorful and artistic project to help solidify their knowledge? All you need is a simple starter set of chalk pastels, a pack of construction paper, and Nana’s video art lessons!

Learning About The 13 Colonies In Your Homeschool

The 13 Colonies are a fascinating part of our nation’s history, and to learn about them, it’s interesting to view them from a geographical and economic standpoint.

The Middle colonies included New York, Pennsylvania, New Jersey, and Delaware, and the Quakers dominated these regions. Their economic activities were based on agriculture, including wheat, rye, corn, vegetables, fruits, and livestock.

We also enjoyed learning about the founding of each colony.

Did you know that James Oglethorpe founded Georgia in 1732? He wanted to empty the debtor jails in England. Oglethorpe wanted to send all those in England who owed money to Georgia to pay off their debts! He also wanted a buffer between the Spanish in Florida and the English in the Carolinas.

When studying the original 13 Colonies, I also pulled these books from the library:

Like many children, my son is a hands-on visual learner. He enjoys his studies and retains more knowledge when there are hands-on and creative components to his lessons. That is one of the reasons Nana’s chalk pastel lessons have been a vital and thriving part of our homeschool for many years! Learning about the 13 Colonies was no different. Though we read books and watched documentaries, the hands-on art of Nana’s 13 Colonies chalk pastel lesson solidified his understanding!

Chalk Pastel Resources For Learning About The 13 Colonies

With the You ARE An Artist Clubhouse, you have access to 700+ chalk pastel video art lessons. In addition to the 13 Colonies lesson, did you know that Nana has other Early American history art lessons?

There are so many excellent chalk pastel history lessons to choose from:

Simply choose the history lessons that best fit the era of history you and your child are studying, and you are on your way to a hands-on and colorful way of experiencing the past.

Join the You ARE an ARTiST Complete Clubhouse to Access Them All! 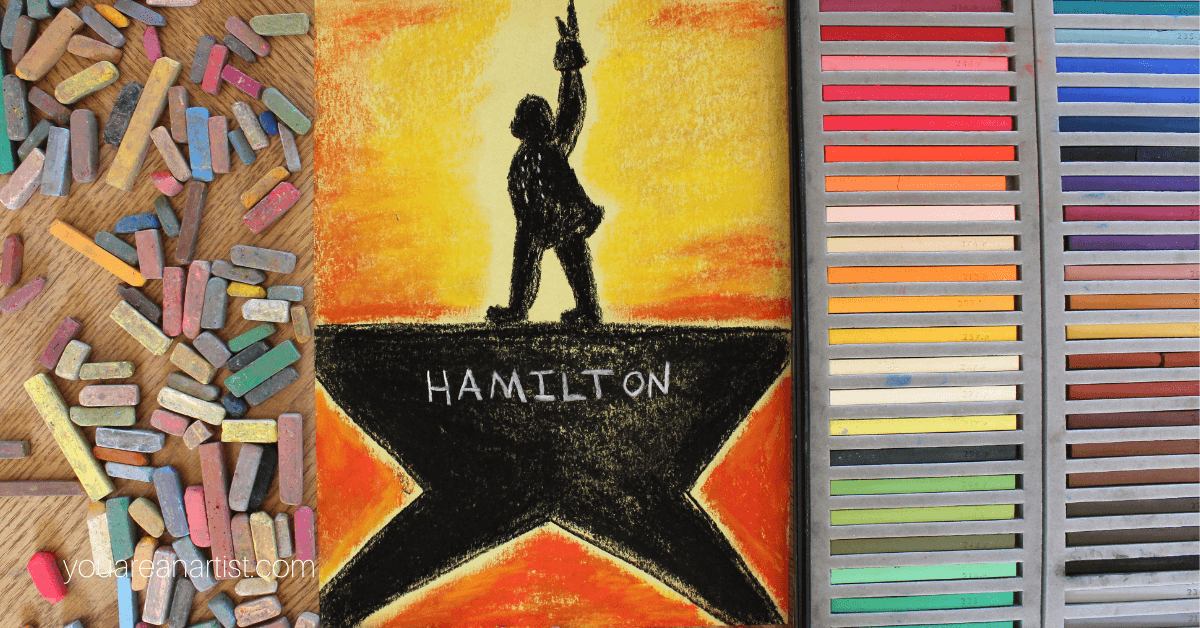 Are you looking for ways to bring the revolutionary war to life? Do your older kids love music? Did you know you could combine the two with books and chalk pastel art to provide a hands-on learning experience? Use these ideas to create your own Hamilton the musical homeschool study! And don’t miss the free Hamilton the Musical art lesson included, below.

What Is Hamilton the Musical?

I was excited to watch Hamilton: An American Musical when it first came to Disney+. I had heard so many great things about this Grammy and Tony Award winner.

It is a musical written by Lin-Manuel Miranda which follows the life of one of our founding fathers, Alexander Hamilton.

The musical is filled with rap and hip-hop that takes you back in time to show how Alexander Hamilton arrived in this country as an immigrant and became one of the most influential men in American history.

I thought I was the only one interested in watching the Hamilton musical. Still, within a few moments, the whole family was sitting beside me watching the story of Alexander Hamilton.

Hamilton is now a family favorite!

*Hamilton, the musical, does contain swear words and other content that may be viewed as inappropriate for children. I felt that my children’s enthusiasm for history, reading, and music far outweighed my concerns. Please preview the content and use your best judgment on whether it is appropriate for your kids and family.*

Folks, my son LOVES history. He’s been obsessed with WWII for years, but with the introduction of the Hamilton musical, he has also become interested in the revolutionary war!

The American revolution was suddenly fascinating! Why did George Washington trust Hamilton? Was Aaron Burr truly a villain? Why did James Madison criticize Alexander’s financial plans for the new country when he supported them at first? What about King George III? Was he really mad?

Imagine our delight when I discovered Nana had a Hamilton musical chalk pastel lesson AND oodles of lessons on American history that coincided with the revolutionary war and American presidents!

With the You ARE An Artist Clubhouse you have access to 700+ chalk pastel video art lessons, including:

We listen to the Hamilton soundtrack in the car and when we’re doing chores around the house. It’s not uncommon for one of us to break out into song at random moments throughout the day.

King George III is one of our favorite characters, and we have the t-shirt to prove it.

“AND WHEN PUSH COMES TO SHOVE, I WILL SEND A FULLY-ARMED BATTALION TO YOU REMIND YOU OF MY LOVE.”

The Hamilton musical brought all of these historical figures to life in a fun way while also giving us an education in music and pop culture. We looked up the lives of the main characters as well as Lin-Manuel Miranda. There was so much to learn!

Hamilton The Musical Art Lesson for Your Homeschool

If you enjoy Nana’s Hamilton video art lesson, please share a photo of your painting and tag @chalkpastelart on social media! Nana would love to see and to comment.

History isn’t black and white. It is shades of grey and usually told from the point of view of the winners.  So, I like to pull information from multiple sources.

For my 9-year-old daughter we learned more about Hamilton with these books:

For my son we used the books:

With both kids I used:

We didn’t just learn about Alexander Hamilton but many of the founding fathers, including their triumphs and faults. Combining music with art and books was a perfect way to make history hands-on and fun! It provided us with lots of topics and rabbit trails of interest. Nana provided excellent lessons with some of our favorite historical and musical characters of the revolutionary war that won’t soon be forgotten.

“AMERICA, YOU GREAT UNFINISHED SYMPHONY, YOU SENT FOR ME. YOU LET ME MAKE A DIFFERENCE. A PLACE WHERE EVEN ORPHAN IMMIGRANTS CAN LEAVE THEIR FINGERPRINTS AND RISE UP.”

Join the You ARE an ARTiST Complete Clubhouse for American History and 700+ art lessons!