The world treasures Sir Winston Churchill as a soldier, statesman, orator, author and Prime Minister to the King of England and his daughter who now sits on the throne as the longest serving monarch the world has ever known. But do you know about the famous artist Winston Churchill?

In his later years in retirement, he described his paintings as “duels” with intimidating canvases as a battle of wills, which could finally be won with a display of forceful, brilliant colors…and said, with a sigh, “I rejoice with the brilliant ones, and am genuinely sorry for the poor brown colors.”
Step into history with us as we see how a great British statesman found a source of delight and a relief from the stress of his career. He proudly painted in oils and pastel chalks, producing over 550 paintings, helping him to hone his powers of observation, memory and visual acuity.

Nana is passionate about helping you realize you ARE an artist! Not only an artist with chalk pastels but with homeschooling, creative spaces, favorite family recipes and more. Nana also enjoys chatting – especially about art. If you have followed along with any of her You ARE an Artist video art lessons, you know that. She also enjoys sharing photos and thoughts on topics while she is being creative in her studio space on her back porch. That is where she will be chatting with you – from her back porch. It’s Nana’s You ARE an Artist Podcast!

-Special thanks to Erin Vincent and her artists for the beautiful photos. Be sure to visit her at Nourishing My Scholar. 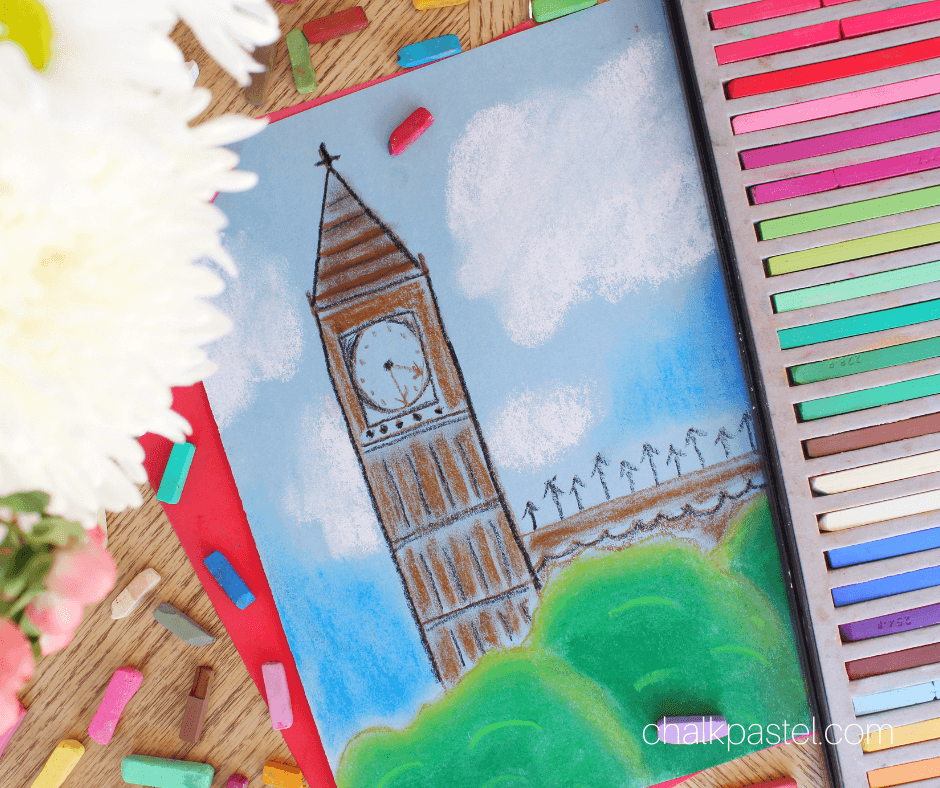 My son has a fascination and intense interest in Great Britain. It started last year after his deep dive into World War II. Did you know he even requested a wall mural of the British flag on his bedroom wall for his 13th birthday?

So, when I saw that the Chalk Pastel You ARE AN Artist Membership had Great Britain themed art, I just knew my son would be excited.

We started with some special British treats, tea, and the chalk pastels map of the British Isles.

We became even more excited to learn some of the interesting facts about the places and things we were painting.

When we painted Queen Elizabeth II on her throne we learned about the symbolism and history behind her clothing, her throne, and what used to be beneath it!

I just love learning right alongside my kid’s!

I never knew that Winston Churchill was a famous artist! I only ever studied him as the great statesman that helped Great Britain through World War II. But there is a chalk pastels Great Britain lesson on this famous artist! Nana even has a podcast about this extraordinary man and artist!

Did you know that he was nervous about painting in the beginning? This amazing man was apprehensive about adding the color to the canvas at first! How incredible is that? Yet, after he got over his fear the colors became therapeutic for him.

I think we can all learn something from that little tidbit!

You ARE An Artist Clubhouse

With the You ARE An Artist Clubhouse Membership you’ll have access to a wide range of chalk pastel Great Britain themed art lessons including:

And don’t forget about all of the Chalk Pastel Narnia lessons you can add into an England themed study!

If your kids are studying Great Britain in their homeschool or they just have an intense interest, then be sure to check out the wonderful art lessons available with chalk pastels!