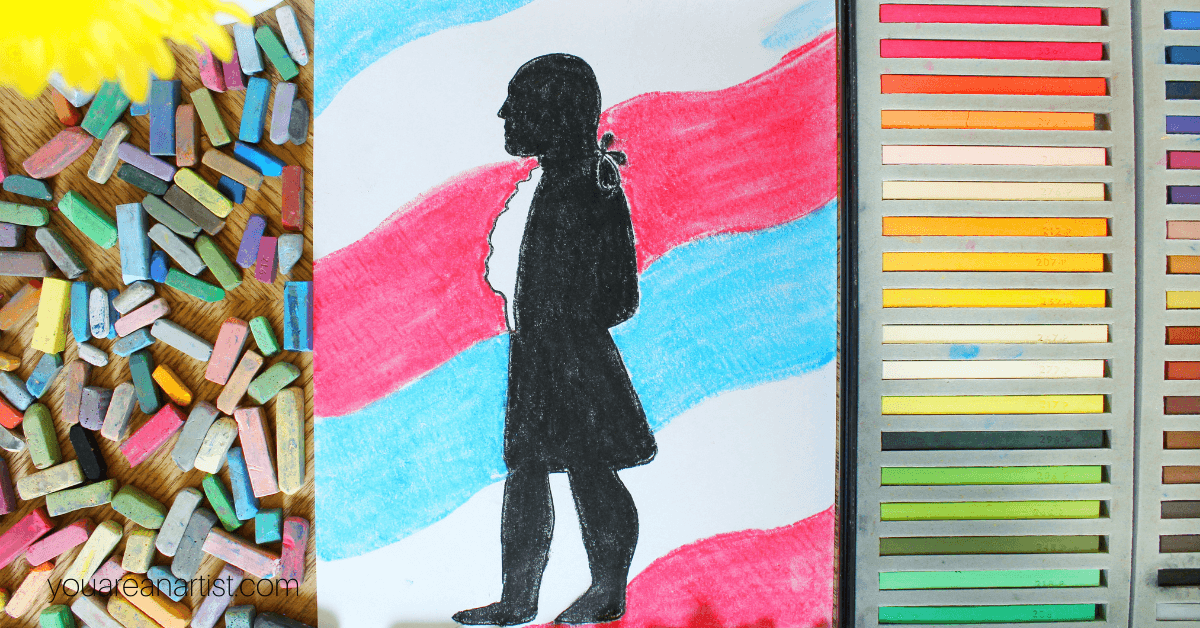 Are you looking for fun ways to incorporate American history homeschool lessons? Maybe you already have a history curriculum, but you’re looking for ways to make it more hands-on and engaging. Chalk pastels may be just what you need to get your kids to fall in love with history!

I decided to let my kiddo dive as deeply as he wanted into the periods that interested him. While I occasionally strew other periods about for his delight. And guess what? It’s working! Strewing books, games, and even art, works! Sometimes it can be something as random as listening to the Hamilton musical or watching a documentary on current events that sparks a question that leads to a rabbit trail of discovery. The more questions asked, the more answers we lookup. Before you know it, we’re diving into George Washington, Paul Revere, Lewis and Clark, the Louisiana Purchase, Slavery, the Underground Railroad, and even John F. Kennedy!

You ARE AN Artist Clubhouse American History Online Art Lessons

I’ve found that our You ARE An Artist Complete Clubhouse Membership to be a wealth of resources! They have online chalk pastel lessons from early American history through modern American history and everything in between, with new lessons added each month! There are 700+ lessons of all sorts to choose from. Then, there is the Companion I Drew It Then I Knew It History workbooks! These are perfect jumping-off points for a quick history study!

All you need are a cheap set of chalk pastels, a pack of construction paper, and the You ARE AN Artist Complete Clubhouse Membership.

I gathered up all of our encyclopedias and history books and laid them out on the table. My son casually mentioned George Washington. Sure enough, Nana has several George Washington lessons to choose from and 19 other American history lessons!

This American history homeschool lesson silhouette of George Washington was super fun. We enjoy silhouettes because they’re easy enough for anyone to do. There is no detail to put in. Just draw the outline and then shade it in black! As we draw, we talk about who this historical figure was. What were his accomplishments? What were his faults?

Tea Party, anyone? How about the Boston Tea Party? My son asked how much the tea was worth that was thrown into the bay that fateful night. It turns out those 342 chests of tea were worth around $15,000!

Paul Revere’s Ride is another famous event! But we like to dig a little deeper when we find an interest. Did you know that on April 26, 1777, 16-year-old Sybil Ludington set off on a 40-mile ride to muster the militia in response to a British attack? She rode twice as far as Paul Revere. Did you also know that General George Washington personally thanked this brave girl after the battle? I didn’t realize until my son, and I discovered this gem of history. This is the kind of tidbit that gets my kiddo excited! We can pretend this hat, and lantern lesson is Paul Reveres or Sybil Ludington!

We explored the Lewis and Clark homeschool lessons after talking about the Louisiana Purchase. The journey and adventure they had were truly astounding. So many new discoveries were made on that trip! Thomas Jefferson was indeed pleased with his purchase after that!

And then my son asks an all-important question, ” How can the Europeans just arrive somewhere and say that it belongs to them now? How can they buy and sell land like that? The Native Americans were there first.”

Also, you’ll notice that he wrote “Swamp” instead of Spain on Florida… I laughed so hard when I saw what he wrote!

My son’s favorite American history homeschool lesson was that of Harriet Tubman. He’s read several books about her and watched several documentaries about her. He loved the I Drew It Then I Knew It History workbook about her too. It offered some fast facts and a short biography that he thoroughly enjoyed. Harriet Tubman was indeed a remarkable woman! Now my son is excited to learn more about the Civil War and the Underground Railroad!

The You ARE An Artist Complete Clubhouse Membership also has a plethora of American Presidents art lessons to choose from, including:

I asked my son if he was interested in learning more about any of them, and without skipping a beat, he said, John F. Kennedy. Lucky for us, there is a chalk pastel lesson of him hunched over a writing desk. You can see the weight of the nation on his shoulders.

While American history isn’t always pretty, it does need to be explored by young and old alike. It’s important to understand where we came from, what decisions got us to where we are now, and how we move forward. It’s essential to learn about key historical figures and even some that, while not as famous was just as instrumental in weaving the tapestry of our nation.

Encourage your kiddos to ask questions. Help them to find answers. Continue to dig a little deeper for as long as they are interested. Let Nana’s chalk pastel lessons make learning about American history fun and engaging even if history isn’t your child’s favorite subject!